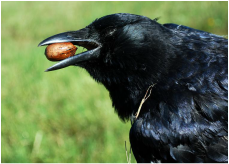 Crows are a member of the Corvidae family of birds which also includes ravens, rooks, magpies, and jays. This family of birds is considered to be the most intelligent of all birds, even approaching the intelligence of primates. Crows are known to solve puzzles; play; and use and make tools, all of which are indicative of intelligence.

Many animals have had to adapt to living around humans and crows are no strangers to the new urban lifestyle. One particularly impressive incidence of crows’ adjustments to humans is how the crows in Sendai, Japan learned a new way to crack open nuts. One good way to crack open a nut is to drop it onto a hard, flat surface such as a road. However, sometimes this is not enough to crack a particularly hard nut. An even better way to open a nut is to get a car to run over it. This is what has been going on at intersections all over Sendai (Nihei and Higuchi 2001).  Crows have been spotted using cars to crack nuts since 1975 and the behavior has spread, which shows social learning in the animals (Nihei and Higuchi 2001)(Marzluff and Clucas 2010). The crows have developed different techniques to better ensure that a car will run over their nuts. Some crows will drop nuts in intersections and move them if they are not run over in a timely manner. Others will place nuts carefully in front of stopped traffic, and others will drop nuts in front of slow moving vehicles (Nihei and Higuchi 2001).

There were 17 sites total where people reportedly observed this nut cracking behavior. It was found that all of these sites had three things in common: proximity to walnut trees, intersections or areas where cars must stop or move slowly, and moderate amounts of traffic (Nihei and Higuchi 2001). 22% of respondents “witnessed the car-using behavior, Suggesting that ar-using behavior has a considerably high sighting frequency” (Nihei and Higuchi 2001).

As if this car-using behavior was not impressive enough, the crows have figured out how to use the crosswalks. Using a car to crack a nut for you is only useful if you can retrieve it safely. In order to do this, the crows watched the intersections and discovered the safest time to retrieve their food. Unsurprisingly, this time is when the crosswalk for pedestrians is green. The crows wait for the signal to turn, hop into the crosswalk and safely collect their freshly cracked nuts. This is a truly impressive display of resourcefulness and adaptability to living in a human environment. What is also impressive is the crows’ effect on the humans around them. Since this behavior has become better known, drivers in Sendai have changed their behavior. Drivers are now on the lookout for nuts in the road and will purposefully drive over them if spotted (Marzluff and Clucas 2010). 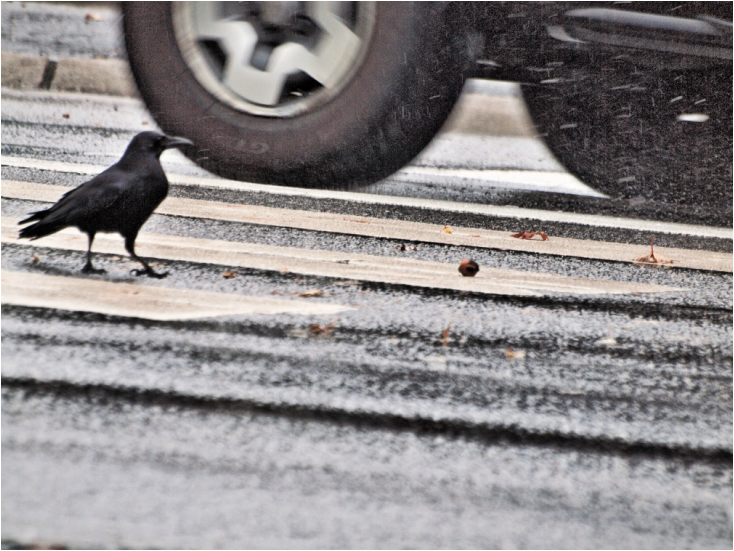 Marluff, J., & Clucas, B. (2010). Coupled Relationships between Humans and other Organisms in Urban Areas. In Urban Ecology.